The Greeneville Congregational Church warmly welcomes you to our web site. Located in the Greeneville section of Norwich Connecticut, the Parrish was founded in 1833.

The Reverend Gregory Perry is the Pastor of the Church.

We hope that you will consider worshipping together with us at the following service:

What is a Congregationalist?

The first Congregationalists to come to the New World were the Pilgrims in 1620. 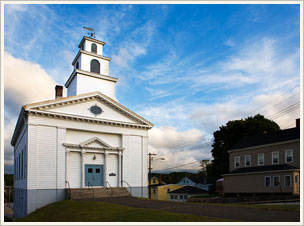