Probably no American general aside from George Washington was more responsible for the winning the Revolutionary war than Norwich-born Benedict Arnold. Yet instead of having states, cities, universities and warships named after him, there's just a simple plaque -- and not an old one, either, marking the approximate site of his birthplace.
Arnold, who was by all accounts a valorous, skilled and inspirational leader, was instrumental to the victory at Saratoga in 1777, which led to French intervention in the war. He fought notable battles at Quebec and Valcour Island, as well. But sidelined to a secondary post and overcome with jealousy over less talented officers promoted above him, Arnold became the most notorious traitor in American History and tried to surrender the post at West Point to the British. The plot was discovered, Arnold fled to the enemy and was rewarded with a general's commission -- if not the trust that would go with it. Infamously he led a British raiding force that attacked Groton and New London and resulted in the Fort Griswold Massacre.

No trace of the homestead remains, and even the simple plaque that notes that Arnold came from here is a recent addition. 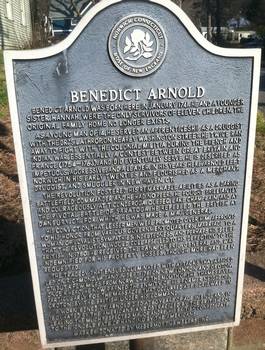